Where This Poem Started

On this Independence Day 2020, I'm thinking about what it means to be an American. Is there a way for all people who live in this country to come together on common ground?  I wanted to share a poem I wrote a few years back about Mt. Rushmore and the mountain it was carved from - The Six Grandfathers. It captures my thoughts, my hopes.

This all started many years earlier with another poem I wrote titled “Ozymandias In Reverse”. That poem told of a person traveling in the desert who came upon great carved stones lying about on the land, and a tower built of these stones. The person wondered how these great building stones and tower came to be. The poem was an attempt to take the idea of Percy Bysshe Shelley’s “Ozymandias” and turn it on it’s head. It wondered if a great structure, rather than falling into wreck and decay with the passage of time, could somehow come into being, could come to greatness with the passage of time.

The narrator in this poem comes to realize that the reason the great stones and tower are there may not be due the power of the hand that shaped and built them – they may only be there because everything else around them had worn away. The stones that remained had withstood the test of time.

Then I saw a beautiful picture of Mount Rushmore, a picture taken from the air, showing Washington’s face in profile. His face was like the prow of a ship, gazing out onto America.

I had visited Mount Rushmore many decades before and had an image of the monument in my mind, but this picture struck me differently. Instead of us looking at the figures on Mount Rushmore and wondering about them, what do those figures think when they look out at this land? And then another question came to mind – what about the figures that are missing from this monument? What about those who lived on this land for millenia before the Europeans arrived?

These great figures from our past – whether they are present in granite or in spirit – what do they see when they look out at their country, when they look at us? That’s where I started. 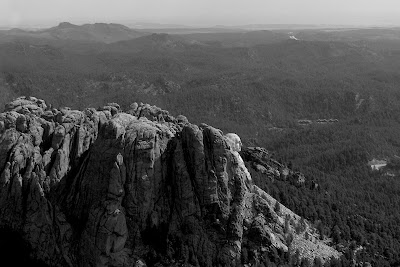 Posted by Mark Bohrer, Poet Laureate of North Andover at 10:03 AM