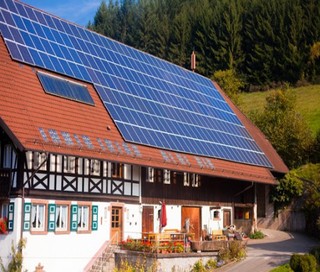 South Church Green Team
Climate Reader
Here is a collection of articles that serve as a starting point on what you need to know on the scientific, political and moral aspects of the climate change crisis, the crisis of our age.

These articles are a way to help you get started to understand:
1)   The situation we face (Yes, it’s serious)
2)   Why the scientific debate is over (Yes, the evidence is unequivocal)
3)   Why we need to act now (We have only a few decades to make significant cuts in emissions)
4)   How it can be solved with today’s technology (We don’t need to give up everything to solve it)
5)   How people and countries around the world are already succeeding in the transition to a low emission economy (How the changes are also making life in their countries better and healthier)
6)   The few simple big things that will get us there (Starting first with a fee on carbon emissions. This uses the free market to find solutions, and taps into the incredible inventiveness and creativity that we have, and that we’ll need to solve this)

The climate change problem is different and more challenging than anything the human race has faced before. It can and must be solved if we want to have a stable, habitable planet for ourselves and our children to live on.  If we don’t get on a path to solve this, and act soon, climate change will soon dwarf any other problem we face.

Now is the time to act.

SC Green Team Climate Reader
Table of Contents
(Note: Not all content has been uploaded yet, so some presentations and links are not yet live. But feel free to start reading what's here!)

1.    What You Need to Know about Climate Change

3.    What Can I Do to Make a Difference for Myself and My Family, Right Now?

Where Can I Find Out More?

Storms of My Grandchildren by James Hansen, former head of the NASA Goddard Institute for Space Studies
This book was written by the man who is perhaps the world’s leading climate scientist. It’s the best book I’ve read so far because he covers the whole scientific picture of climate change from millions of years ago through the changes we’re introducing today in clear and understandable way. Secondly, and just as importantly, he also tells the story of how the Bush administration played games with science by attempting to manipulate or block the research that he was trying to report.
Field Notes from a Catastrophe by Elizabeth Kolbert
Online review comment: “Earlier this year I read The Weather Makers by Tim Flannery. It was an excellent book full of scientific explanations to nearly all the questions I had about the issue of climate change. Now I have just finished Field Notes From a Catastrophe by Elizabeth Kolbert. It also is an excellent book. In fact, I wish I had read it first - not because it is the better of the two books, but because it is a better introduction to the subject.”
The Weather Makers (2005) by Tim Flannery"
“The author, Tim Flannery, has succeeded in writing one of the most comprehensive and easy to understand books on climate change and the effects fossil fuel consumption has on our planet. He lays out the science, the politics and economics behind the effects greenhouse gases have on our planet. These effects include mass species extinction, rise in temperature of the Earth's atmosphere, as well as its oceans, and sea level rise just to name a few. Flannery also does a wonderful job of laying out some of the practical steps we need to be taking in order to avoid catastrophe for future generations and possibly even our own. Highly recommended.
Now or Never: Why We Must Act Now to End Climate Change and Create a Sustainable Future (2009) by Tim Flannery
He has some significant ways (that were mostly new to me) that we can make changes to how we live as a species on this planet and how we can take steps to limit or reverse our impact.
The Long Thaw: How Humans Are Changing the Next 100,000 Years of Earth's Climate by David Archer (2010)
The Climate War by Eric Pooley
Eric Pooley has served as managing editor of Fortune and national editor, chief political correspondent and White House correspondent for Time.  He is now deputy editor of Bloomberg Business Week. No Rolling Stone there. A lot of behind-the-scenes reporting on both sides of the climate change argument. Here you see why the deniers case is not defensible.
Climate Wars by Gwynne Dyer
Gwynne Dyer is military analyst, and he runs through some of the likely/possible scenarios over the next 50 years, and how countries are likely to react to loss of water, droughts, constant storms, refugees streaming across their borders. Not pretty.  Think about what WW I was fought over. In that case, millions died over treaty obligations, colonial rights in Africa and bad feelings?  What happens when countries are in real stress and their neighbor countries have food and water?
Books for kids

The kids books are actually good for adults looking for a fast way to come up to speed on the topic, and make for a quick read!
Our Choice (Young Reader's Edition) by Al Gore - aimed at the 6th-8th grade audience.
How We  Know What We Know About Our Changing Climate; Scientists and Kids Explore Global Warming Cherry, Lynne and Gary Braasch. (Grades 4-8)
An introduction to scientists around the world and their research into global warming. Also work of citizen scientists, including children. Covers where clues are found about climate change, combining clues to  get the big picture and how the resulting information is used, and what we all can do. List of all scientists introduced and their locales at the back of the book.

"The scientists have been consistently wrong about climate change in the following way: They’ve always been too conservative. The things that are really happening are happening faster than the predictions, than even some of the most pessimistic predictions. Scientists are human. They’re going to have a denial mechanism. They’re, in a way, almost hesitant to say how bad it could be because they don’t want to be considered alarmists. But it’s consistently coming out worse than even their dire case predictions. So when you’ve got the rightwing demagogues saying that the scientists are wrong? Yeah, they’re wrong. They’re wrong the other way. It’s much worse than they’re saying."