Football poem "Before the kickoff"

Poetry before a football game? Well, of course!
I had the chance on Friday to introduce the North Andover HS and Westford Academy teams with a poem.
Thank you to Sara Durkin for being open to the idea of a football poem before the game. The Scarlet and Black chorus were lined up to sing the national anthem - and she gave me the mic:
"Two teams will take the field - Scarlet Knights, meet the Grey Ghosts.
To the captains - are your teams ready to give their most?
First honor sportsmanship, first honor fair play.
Then seek to be champion, then seize the day.
Both teams come here to compete,
both teams come here to win.
One will leave the field with the banner,
may all leave the field as friends. 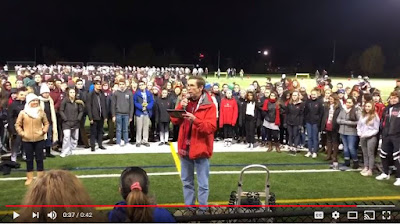 PS
The idea for this little poem all happened last week. On Tuesday night, Gayle Heney, a past Poet Laureate of North Andover, handed me the email address of Ray Ahern, a cameraman for NA Cable Access. NACAM records and broadcasts the HS football games, and Ray thought it would be cool to have a poem at the coin toss. So I wrote these lines over the next few days.

I arrive early to find Ray (who I had never met) before the game. As I talked to him, it was now clear that this was his idea only, nobody else there was on board. Like the PA announcer or Athletic Director or anybody. But he did have a good idea. And I had my little football poem. So now what?


I needed Sara Durkin, NAHS Chorus Director. I knew that reading it before the national anthem would be perfect. Would Sara be ok with it? Since I'm on the board of the North Andover Music Association, the music booster group, she knew who I was.  So I headed to the HS auditorium, and found her with the chorus where they had just finished rehearsing. I explained what I wanted to do...she was a little confused until I said I was North Andover's Poet Laureate. Then it all made sense to her! She gave an enthusiastic yes. Thank you Sara. Should I do one for this Friday's next playoff game? (PS I did!)
Posted by Mark Bohrer, Poet Laureate of North Andover at 12:50 AM