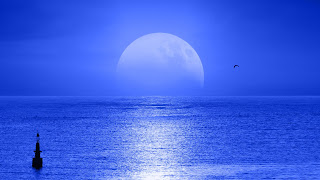 The moon is almost full.
Stand with me at the narrow straits,
where the Merrimack meets the tide.
Gaze across the bay, under the gibbous night,
watch at anchor, how the island rides.
Against the dark, it plumbs the deepening sea.
Breathe in the cool night-air, and look!
Even the wind on the water moves to the lunar pull!
Keeping her date, the moon rests on our shoulders.
Starlight gleams from a distant shore.
Moon-blanched rocks stand above the flood,
the Joppa Flats are gone. Salt-marsh birds rest in the reeds.
Tonight they hide, choosing to let the tide work its force.
Keeping her promise, on her ephemeris, the moon moves,
the waters rise, and our river changes course,
bearing in the salt, a salve for the wounded.
Tonight we receive the tide’s ephemeral and ageless balm.

In this long arrival of life, I am reached
by a tide that stands full at the strand.
The water lies full at my feet, cresting
where I stand, where I am, cresting the shore.
Good comes in, comes in, to me as to each,
retreats and then, calls out, have some more.
In this run, ebbs strife.
Good flows in, arriving, and arriving.
It is enough. I take, I sample, I store.

Tonight there is no retreat,
no gliding taking in the wash of the strand,
no draw of the tide, no grating roar.
Tonight the same salten sea rises within;
the same ocean river courses the inner shore.
It runs in this temple, in these freshets and veins.
Tonight it arrives, bearing the same cure.

I am not as wounded as I thought –
no knife to withdraw.
I am speechless, struck dumb to my shallow core
by the depth of the sea that surrounds.
The breath of the sea-air touches my face,
sea and stars go still; wind and water, no sound.
From afar, tide and moon in silent tune embrace.
I see no struggle, no pain, no sadness, no sorrow –
no need. The moon is almost full.

What if I am standing at the waters of Charon,
in range of his searching eye? The ferryman, ready on his raft,
ready with his constrictors, his leathers, his binds,
gliding by, on the dark river Styx, silent, his eye all hunger –
what if he found me with no want, no hunger, no need?
What if he turned downstream?
Tonight, the ferryman turns his eye,
and misses one.
Ready with his constrictors, he turns from me,
and I unwind what was taut.
The cord of discord is loosed, prevented, undone.
I have finally gone to school. I have finally learned
how to be untaught.
What I have is enough.
The night-air is sweet. The tide is full.
The darkling plain but reveals
the glimmering light of the stars.


Postscript: My Response to Dover Beach
One of my favorite poems is Dover Beach by Matthew Arnold. I hesitate to say this because it's such a downbeat poem. Oh my God, I swear, if Mr. Arnold had a pistol nearby when he completed it, it might have been all over.  In these latter days of an endless and endlessly downbeat election season, I can relate more than ever to the downbeat view of the human condition found in Dover Beach. "Darkling plain" indeed.

The poem is short, less than 40 lines, and very accessible. And yet it has so many layers and echoes for such a short poem. There's a good chance you read it in high school. It's called "the most anthologized poem in the English language." If you're not familiar with it, it's worth reading. Even if you've read it, it's worth re-discovering. Here it is:

I've been carrying this poem around in my head for a while now. The thing is, as beautiful as it is, and as evocative as it is, I couldn't disagree with it more. So in addition to the words of the poem, I carried THAT thought in my head for quite a while. Somehow, Mr. Arnold got it fundamentally - if beautifully - wrong.

Well, as I carried this thought around, something happened, as things do. This mulling turned into a poem - one that actually started out in response to something else - but somehow in the end became Almost Whole, and a response to Dover Beach.
October 2016  North Andover, Mass.
Posted by Mark Bohrer at 11:17 AM