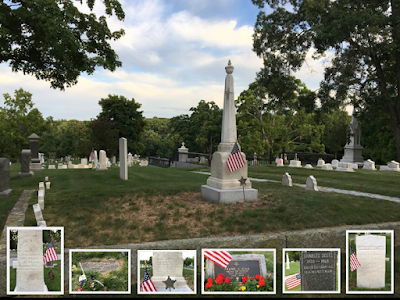 The 5th of July

On the day I was born,
my mom stood on the battlefield.
Not a woman for dramatic entrances,
and even though her doctor warned,
she went, she didn’t want to miss the tour.
She went to hear the old historian,
to stand amongst the crowd in the morning dew,
to stand in the blue and gray dawn,
feet hurting, waiting expectantly.

I listened as my mom retold,
in the voice of the woman guide,
words that carried us past the span of the living,
how we came to stand upon that field,
words that summoned the watch-fires
of a hundred circling camps.
In the mist, we felt the eyes of soldiers watching,
eyes that told of fateful lightning and swift sword.
Hearkening the sounds of battle to our ears,
I was there as the historian spoke.

They fought on the 4th.
On that day, some laid down their task.
Their work brought us here.
Do we know
we were summoned by their call?
We stand on their field.
It’s the 5th of July.
They brought us this far, but could go no further.
The unfinished work is ours,
their unspoken call is heard.

Today is the 5th of July,
the day we were born.

Mark Bohrer
June 2016, North Andover Mass.
POSTSCRIPT
The 5th of July – The Story Behind This Poem
I walked around Ridgewood Cemetery on Salem Road this past weekend. It was the 7th of July, but in my mind I went there with thoughts of the 4th of July just past, as I walked and looked at the American flags. It made me think about those who served our country. Patriotism is not a simple thing. Those who serve when called by our country in time of need do so whether they support or even fully understand the purpose of the call. They serve. For those who died in the Civil War, just reading their names, ages and where these men died made me think about their sacrifice. Here are just a few of the names that I saw:
William W Rea 1862 20 yrs old, Harpers Ferry
Charles Scott 1864 31 yrs. old. Salisbury NC
Wm. H. Hardwell 1863 24 yrs old (stone too worn to read location)
Andrew J. Fish 1863 31 yrs old. New Orleans
Samuel G. Phelps 1864 28 yrs old. Andersonville GA
Charles M. Bridges 1862 31 yrs. old. Natchez Miss.
Who were the volunteers? Who were the conscripts? Some of the cemetery stones record this part of their stories, but many only list their ages and where they died in service. What purposes guided their service? What did their families and townspeople come to understand about their service and sacrifice?
Sometimes being a patriot is taking a stand that brings revile and scorn, sometimes for life. Our town's best example is William Symmes of North Andover (then Andover). He broke the stalemate on Massachusetts approving the US Constitution, against the specific direction of town meeting. A lawyer and civic leader, he left town shortly after he cast that vote, never to return, even for his father’s funeral.  Civic patriots are worthy of note as well.
Patriotism is not simple. I was left with the feeling that all we can do to honor their sacrifices is how we live, and the stands we take. That's what I thought about in this poem that I wrote a few years ago. The poem started in that same cemetery at the annual Memorial Day ceremony. The taps from that ceremony still echo for me.
July 7, 2018  North Andover, Mass.
P.S. Here's the story of North Andover's William Symmes: https://tinyurl.com/williamsymmes
Posted by Mark Bohrer at 10:31 AM