Coal's true cost is not cheap

Another analysis that shows coal's true cost is not cheap. We are paying for the "other" costs of using coal, and it's not covered by the per ton cost of coal that's reflected in the "low" cost of coal electricity. We pay it, with health problems, illness and death, not the coal companies. This is from conservative economists and is published in the American Economic Review. Take a look. Free markets can fix this problem. This is the true price of coal. 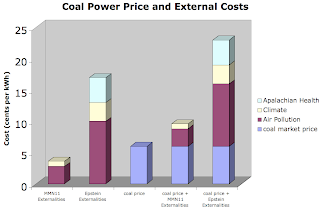 Skeptical Science previously examined the fact that the market price of coal power is artificially low because we do not directly pay for all of its impacts, particularly on air quality and climate change.  People who feel these effects do pay them indirectly (i.e. through increased health care costs), but since their costs are not reflected in the market price of coal power, economists call them "externalities," and view them as a major failing of the free market.  As Nobel Prize-winning economist Paul Krugman put it,

"consumers are paying much too low a price for coal-generated electricity, because the price they pay does not take account of the very large external costs associated with generation. If consumers did have to pay the full cost, they would use much less electricity from coal — maybe none, but that would depend on the alternatives.
At one level, this is all textbook economics. Externalities like pollution are one of the classic forms of market failure, and Econ 101 says that this failure should be remedied through pollution taxes or tradable emissions permits that get the price right."

In short, if the people paying for coal power aren't aware of its full costs, then they can't take those costs into account when making decisions regarding how much to consume.  A new paper published in American Economic Review (a very prominent economics journal) from well-known (and somewhat conservative) economists Nicholas Muller, Robert Mendelsohn, and William Norhaus (MMN11) seeks to quantify these externalities.  Krugman provides his analysis of the paper in the link above, and our analysis follows.
Posted by Mark Bohrer at 12:55 PM