One of the good signs is that religious groups are now spreading the message about climate change action. Interfaith Power and Light, an inter-denominational church organization, has joined with environmentalist Bill McKibben at the Tar Sands protest at the White House. Here's the picture of Bill's arrest. See my excerpt below from the Interfaith Power and Light account. Powerful news. 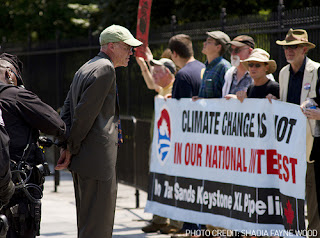 President Obama will decide in September whether to approve the proposed 1,700 mile Keystone XL Pipeline from the massive tar sands in Alberta across the mid section of the U.S. to Texas oil refineries. Barrel for barrel, tar sands oil spews three times more greenhouse gases than conventional oil. Dr. James Hansen, NASA climate scientist, states: "... exploitation of tar sands would make it implausible to stabilize climate and avoid disastrous global climate impacts – if the tar sands are thrown into the mix it is essentially game over."
Environmental activist and author Bill McKibben wrote on Friday Aug. 19th that 2,000 people had signed up to get arrested in front of the White House to protest the pipeline.