My Broadway Song: Shouldn't it? A Manifesto in Song 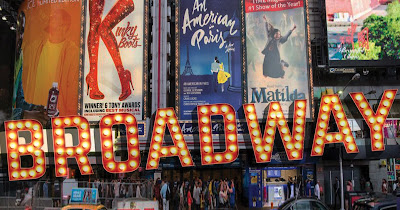 How did I find myself up at midnight...with the thought: "What is poetry? What should it do?" Well, if you ask this question, the first thing you know is "Yes, you're a poet!"

But here's how I found myself facing this question at midnight, and how I answered it:

You never know where inspiration is going to come from, or where it's going to take you.  Bob Whelan invited me to feature at this week's Rockport Poetry event, this coming Wednesday. I wanted to write something new for that evening. Well, I did, but not based on the original idea I had in mind.

This Friday night, I watched the documentary "Best Worst Thing That Ever Could Have Happened". It's about the making and subsequent history of the 1981 Sondheim-Prince musical "Merrily We Roll Along". The musical featured young performers - ranging from 16 to 25 years old - all who had never performed on Broadway. Steven Sondheim and Hal Prince were at the height of their powers after a string of musical successes like Company, A Little Night Music, and Sweeney Todd.
"Merrily We Roll Along" closed after only 16 performances. Audiences got up and walked out during the show. It ended the Sondheim-Prince collaboration and almost drove Sondheim to quit  musical theatre.
The documentary about "Merrily We Roll Along" is beautiful and touching since it not only has great footage from the tryouts and rehearsals (captured as part of an ABC special that was never released), it follows the life path of these young performers over the next 25 years of their lives. A good number stayed in theatre, some with great careers on Broadway. Most did stay for a while but then found other paths, other callings.
But all were deeply affected by this wonderful life-changing experience - that ended in critical failure. They went from the heights of their dream together to the depths of rejection and disappointment. As young people.
Ok, it was midnight when I had the thought, "What is poetry? What should it do?"
I finished the thought with "It should do something..."
From there, I found myself writing a Broadway musical number! Here are the lyrics. I am going to sing this on Wednesday. It may or my not turn out to be art, but I bet it will be worth tuning in for.
I hope to see you there. Look for event info from our host Bob Whelan. 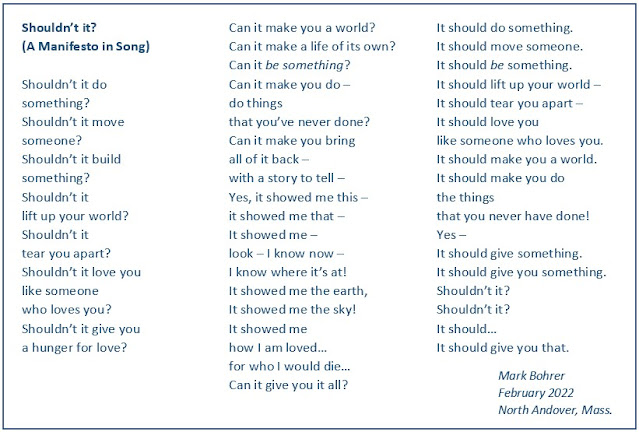