Our ICF addition gets started 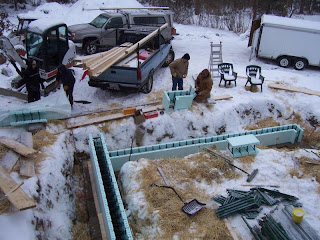 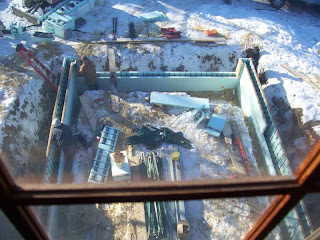 We're putting on an addition to our house, and I thought people might be interested in seeing what we're doing with our addition that will make it more "green".

Instead of conventional framing, we're using ICF blocks, or Insulating Concrete Forms. The entire structure up to the eaves will be insulated concrete. It is up to 2x more energy efficient than a conventional well-insulated 2x6 frame structure. Part of the benefit occurs because the concrete draws up ground temperature, so it tends to stay at 55 degrees. This warms the center of the walls in the winter, and cools them in the summer. Any kind of siding can be attached to the outside, so it will look like any other house. The one difference is that the walls are thicker - about 12" instead of 6".

I included a few pictures here. This is the lower level, and will be the new garage. I'm convinced that this is the future of construction in America. It will be technologies like this, or ones of similar energy efficiency. We can't start improving home construction soon enough.

The inside & outside walls of the blocks are very much like styrofoam! Steel reinforcing bars are placed in the space inside the blocks, and then concrete will be poured in, one level at a time.

I'd be happy to give anyone who's interested more information about our experience so far with the blocks. There are quite a number of manufacturers of ICF blocks. We're using Nudura, a Canadian company. You can find out more at nudura.com.

There's nothing really exotic about it. It's just like any commercial building made out of reinforced concrete, but the insulating forms stay and are part of the house. Like other ICF makers, Nudura sells the other hardware needed to make the structure (like brackets for hanging joists).

It added about 3-4% to the total project cost. I've conservatively estimated that the cost is recovered in about 15-20 years. Of course that's at today's energy prices. If energy prices increase (and the handwriting is on the wall there) the recovery period will be shorter. The second "of course" is that using less energy, and releasing less CO2 is no longer about cost. It's now about survival. The days are over when putting your waste CO2 in the atmosphere is free. That bill is now coming due.

We also have plans to have solar hot water heat, and PV panels, but we wanted to do this to make a difference from the inside.